Effect of Yoga and Meditation on Consciousness & Mindfulness

Sixty participants took part in the experiment (17 to 70 years). The participants were applicants of yoga and meditation program offered for twenty weeks. Four groups of 20 each were formed including, 3 experimental groups and one control. The groups did not differ with respect to gender (11 males and 9 females in each group).

The experiment was in the form of practice of yoga and meditation for 20 weeks. The practice sessions (one hour) were held on weekdays in the evening for three days a week under the guidance of an experienced practitioner. These were conducted by yoga instructor with 10 years of experience and a facilitator with 30 years of experience in teaching meditation.

Each day, the program commenced with a brief 15 minutes lecture covering different topics to reinforce the subjects for meditation. The topics included body, mind, spirit and consciousness; cosmology; spiritual awakening; nerve centres, chakras, kamals and padmas; attunement with spiritual sounds; main object of meditation and ways to establish contact with the source of spirituality.

This was followed by yoga. Seven yogasanas were included in the intervention program for relaxation Siddhasan, Sarvangasan, Bhujangasan, Paschimottanasan, Padahastasan, Ardhamatsyendrasan and Shavasan. These asanas were selected for relaxation and preparation of body for meditation.

After yogasana, the practice of meditation was modeled on practices of oriental philosophy of Saints (Radhasoami Faith). These meditational practices are based on Hierarchical Order Theory of Consciousness. 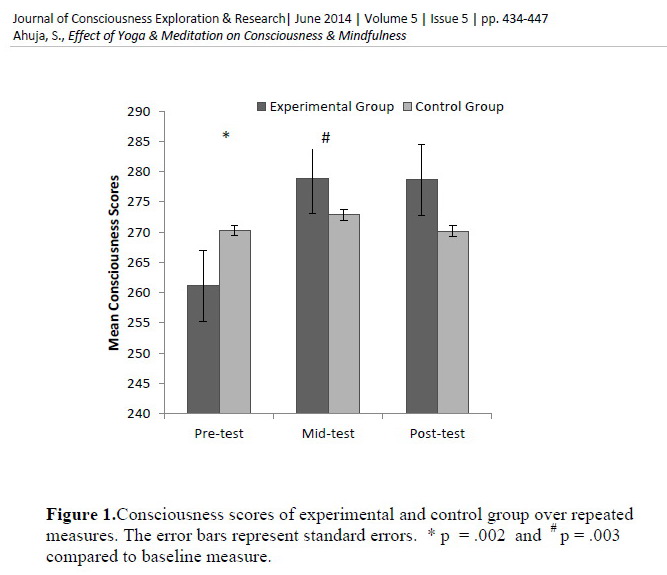 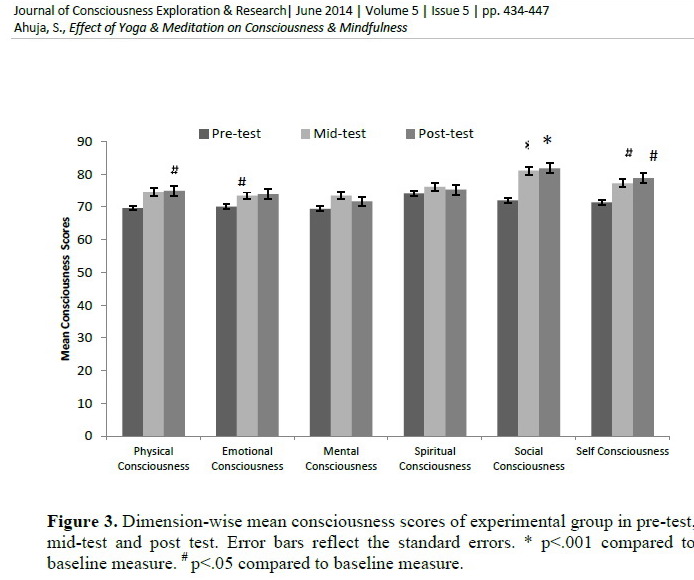 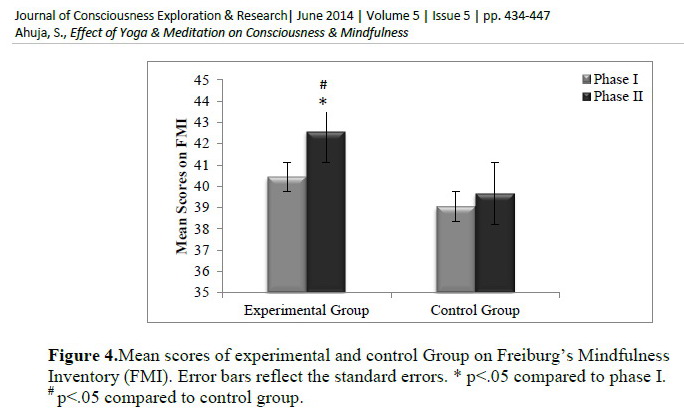 In summary, the results of the study indicate that the practice of yoga and meditation increased the consciousness and mindfulness of individuals. Importantly, the practice has a considerable effect on all dimensions of consciousness over time. The impact is more and relatively immediate on social and self-consciousness. Thus, an individual becomes more aware of self as a person and is able to connect oneself with others. Also, initially after ten weeks of practice, the practitioners did not show a significant change in physical and emotional consciousness but there was a significant increase in these dimensions of consciousness after 20 weeks of practice of yoga and meditation.

These findings corroborate the results of previous studies that report meditation promotes both physical and mental wellbeing and contributes to the development of positive emotional traits. Regular yoga practice is reported to improve aspects of cognition and quality of life for healthy individuals. The workers reported feeling happier, with a renewed sense of enthusiasm for their life and work after eight weeks of meditation training and practice. Meditation effects are conceptualized as a function of the cognitive-attentional processes that are engaged. Also, in line with the results of the present study, it has been reported that experienced meditators generally score higher than novices on most attention measures, including selective, executive and sustained attention. Researchers looking at individuals engaging in Focussed Attention meditation found that expert practitioners with an average of 19,000 practice hours displayed more activation in the brain regions than novices, while those with 44 000 hours of practice showed less.

Note: A previous study showed that an intervention using Contemplative exercises (as designed by Stephen Wolinsky), once a week for 8 weeks don’t produce the necessary impact to increase the CQ of the participants.

Have you experienced an awakening, or an ‘ego death’? Maybe you need answers to your existential questions, or you seek someone to accompany you on the journey? Existential counseling sessions are meaningful conversations that support your evolutionary path, by understanding what’s unfolding in you and learning the inner evolution maps.Take a look to see if it’s helpful for you!

Awakeness has no image, yet – like a mirror – it unites, reflects, and transforms our imaginations, causing love and awe; by sharing awakeness, the delusions of separation dissolve, awakening and enlightening our selves and all of humankind.WHEN?Weekly (every Sunday) at 6pm UTC on Zoom, for 2 hours.