In October 2019, the CQ-i online assessment dataset collected online since 2014 (n = 2,471) was exported from the online assessment platform at www.consciousness-quotient.com. During data collection, no financial gratification was offered to participants for filling the questionnaire, and the order of questions was fixed for each participant. All the participants completed the CQ-i assessment in the English language.

After discarding possible invalid answers, a dataset of 2,360 entries was used in the EFA procedure. After the EFA procedure and following a decision to tighten the inconsistency filters (using 5 pairs of two semantically consistent items in each pair), 94 entries were further removed; thus, a dataset of 2,266 entries was used for norming and score classification. All data analyses were performed with SPSS (IBM, Armonk, NY, USA) and Jamovi (Open Source Project, www.jamovi.org).

To calculate the global score and the scales score, the sum of all item ratings was used. The scoring scale was ranged as, Almost never (definitely no): 1 point; Very rarely/Once in a while: 2 points; Occasionally/Seldom: 3 points; Quite often/Sometimes: 4 points; Very frequently/Usually: 5 points; Almost always (definitely yes): 6 points.

For the entire questionnaire with 237 items, reliability analysis revealed a very good internal consistency: Cronbach’s α = .989, McDonald’s ω = .990. The descriptive statistics for the 15 patterns of conscious experience are provided below.

Scales data were tested for reliability to determine the possibility to create a modular assessment structure (independent testing for each scale). The result showed that each scale is reliable, with some scales having a larger variability than others. Skewness was calculated for each scale, to check if the scale has a quasi-normal distribution of scores. The kurtosis index was included to explore whether the distribution is too peaked (Hair et al., 2017). The most substantial variability in scores was observed for non-conceptual self, quality of experience, energy self, spirituality-harmony, physical self, and awakening skills. The higher variability of these scales may be owing to the variety of developmental methods available and used worldwide, many of them related to mindfulness, meditation, non-duality movements, or spiritual groups. Skewness showed that only a few scales were slightly skewed and were at the threshold for being considered quasi-normal (skewness > 0.5): habitual patterns, language use, perspective-taking, and inner growth.

The patterns of conscious experience are inter-related, containing overlapping items (an item may belong to more than one scale); thus, the scales are highly correlated.

As the raw score distribution was quasi-normal, we decided to use standardized/transformed scores (transformed z scores, M = 100, SD = 15). The initial classification was split into five-point ranges for a better examination. 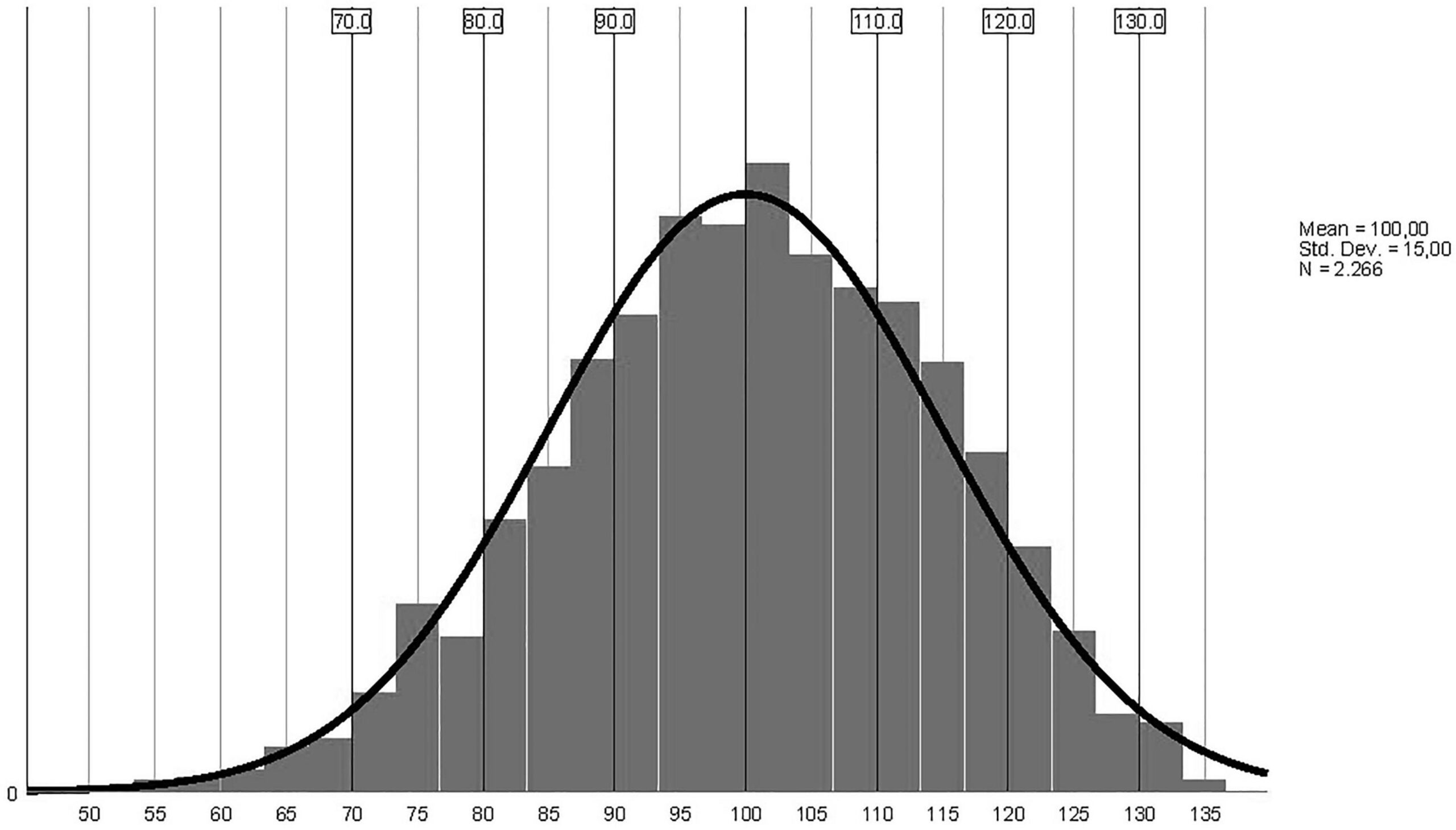 The data for the first and second standard deviations were also used, and the final decision was to use six 10-point intervals, with the average range explored in two intervals: 90-99 and 100-109.

The extreme score intervals were combined for scores below 80 and above 120 (even if the data show there is a statistically relevant granularity) as we wanted to limit the inherent discrimination of people with low scores. CQ-i scores were classified into six intervals with inclusive labels, that were selected to reflect the evolution in the capacity for being conscious.

We limited the number of score categories for practical purposes so that the test-takers would get a meaningful interpretation of their scores. The 6-level classification is the same for the global score and the scales scores.

Future studies on larger samples are necessary for calibrating the cut-offs to more diverse populations.

The archive includes articles, studies, and research papers related to the Consciousness Quotient and the CQ-i assessment.
Explore the repository

Awakeness has no image, yet – like a mirror – it unites, reflects, and transforms our imaginations, causing love and awe; by sharing awakeness, the delusions of separation dissolve, awakening and enlightening our selves and all of humankind.WHEN?Weekly (every Sunday) at 6pm UTC on Zoom, for 2 hours.

Learn to explore your dreams and work with your unconscious mind. The course is an easy-to-use guide to the dreamwork methodology developed by Strephon Kaplan-Williams, founding father of dreamwork psychology.Take the course

Stay in touch with us

Sign up for email notifications about our researches, articles, and events focused on conscious evolution (2-3 emails per year).